Back when I wrote up my favorite keto thanksgiving recipes, I told you I had been working on a low carb green bean casserole recipe but that I didn’t have it quite to where I wanted it. And I promised you I’d have it ready before Christmas. So here it is!

It’s not that there aren’t other low carb green bean casseroles out there. There are. But I couldn’t find a single one that had fried onions. And I really, really like fried onions in my green bean casserole. So while it’s a little more work to fry your own onions (the kind in the can aren’t low-carb) it’s absolutely worth it to me.

I wanted this to have all the familiar flavors of the traditional green bean casserole, but with the exquisite flavors that only come from using fresh ingredients instead of canned. I used fresh green beans but I think you could also substitute frozen and get a similar result.

I used the haricot vert beans from Trader Joe’s, which I cut into thirds. They’re a thin, fresh green bean, and I just like them a bit better. But you can use regular green beans as well.

After experimenting a bit, I found it works better to boil the beans in salted water until they’re your desired doneness. They will cook a little bit in the oven, but not enough to get them to the right tenderness if you undercook them. I liked my beans after about ten minutes in the boiling water, but if you like yours crisper you may like them at seven. Or if you use larger beans, they may need more time.

Using frozen will also impact the amount of time. Basically what I’m saying is that you need to check them and take them out whenever they’re delicious to you. Once they’re done, put them into ice water to stop them from cooking. You can do this a day ahead, then drain and store in the refrigerator.

Here’s what you want to do: Get either one enormous shallot or two average-sized ones. Slice them into 1/4 inch rounds, and then separate the larger outer rings from the smaller ones. Leave the larger rings as they are and chop the small ones. Set the chopped ones aside.

To fry them, I first tossed them in oat fiber

. Oat fiber is an unusual ingredient you may not have in your pantry, so I think you could skip it altogether if you prefer. I just think it helps the batter to adhere a little better. You could also use arrowroot starch

in this, as it may be easier to come by. It has more carbs, but it’s a very small amount that will be sticking to the shallots.

I used egg white as the binder, but when it came to what to dip them in last, I had to do several trials to find something that worked. My initial thought was that almond flour would be the best option, but I found it to be sort of crumbly when fried. Not the texture I was going for. Then I found a recipe on I Breathe I’m Hungry that used equal parts coconut flour

and parmesan cheese. I was hesitant to use coconut flour because, while I like coconut, I find it out of place in most savory applications. However, when it’s mixed with parmesan cheese and fried up on an onion, I don’t notice any coconut flavor at all.

As far as oils go, avocado is your best bet for the higher temps of frying, but if you can’t use that, you can also use ghee or clarified butter.

Once they’re fried, place them momentarily on a paper towel, then transfer to a rack to cool completely.

The typical sauce for a green bean casserole is a can of cream of mushroom soup. But that has wheat and food starch and extra carbs we don’t need. So I had to make a substitute.

I took the chopped shallots and sautéed them with diced mushrooms. I added some thyme and a little sherry for extra flavor but those are optional, and if you want it to taste the most like the canned stuff, leave those out. Then I separated the mushroom mixture into two parts.

The first half I added to a mixture of chicken broth and cream, with a dash of Worcestershire sauce

. Worcestershire sauce does contain a small amount of sugar, so if you’re not comfortable with a trace of sugar (seriously, it’s so small per serving) you could use Tamari

. Just something to help up the savory flavor a little. Then I used my immersion blender to blend it into a sauce.

I added a little xanthan gum

to thicken it a little more, but if you don’t mind your sauce a little thinner you can skip it. The mushrooms do add some thickness already.

Add the sauce and the other mushrooms to the drained green beans, and pour into a casserole dish. I used a 1.5 quart dish.

Cover with foil and bake 15 minutes, then take the foil off and add the fried onions and bake for another 5.

There you have it! Low carb green bean casserole.

I know the holidays are busy times, so I tried a few things to see what works best for making some of this ahead.

What’s your favorite holiday side?

This recipe is easily doubled 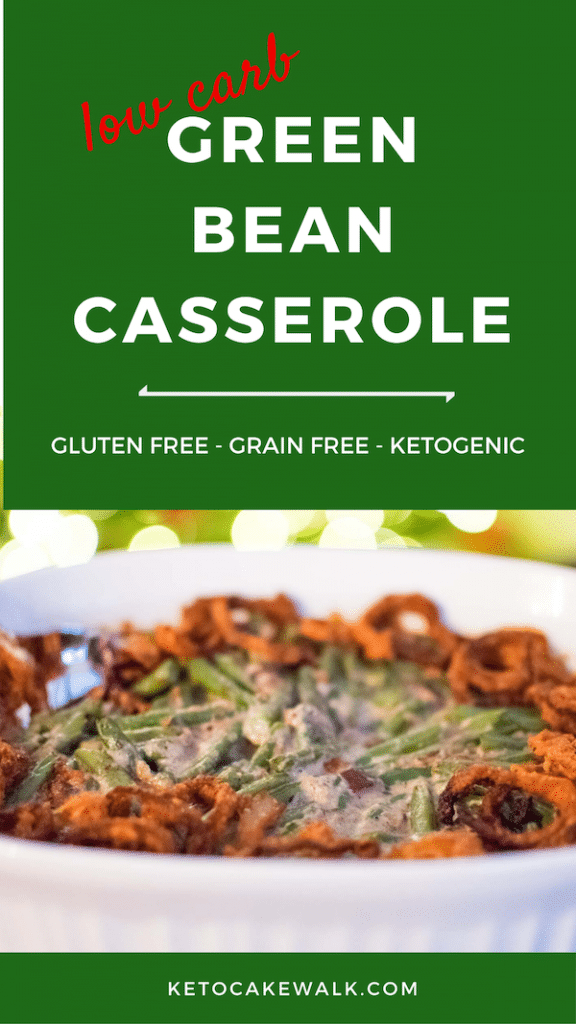 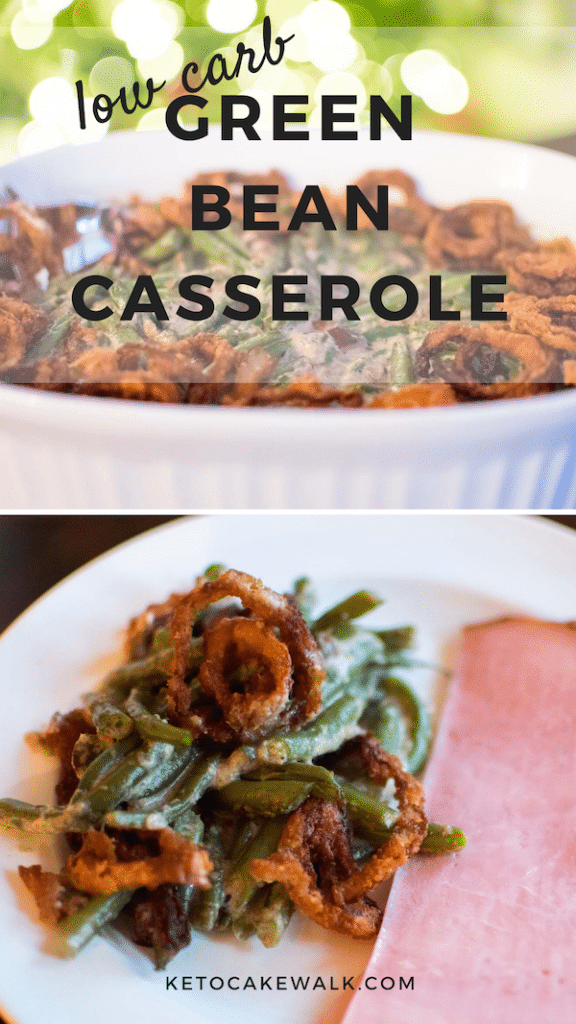