I firmly believe that holidays are for indulgence. I also know that my body reacts badly to carbs. So what’s a girl to do? Create a keto Thanksgiving spread that has all of the indulgence without the excessive carbs, of course!

Let’s talk about alternatives to our favorite Thanksgiving dishes that will keep us moving toward our goals without sacrificing taste, shall we?

Now that that’s out of the way, let’s turn to sides.

I’ve got you covered!

The second has an extra step and takes a little more effort, but it’s perfect if you want the ultimate mashed potato-like texture. For that, check out my perfect mashed cauliflower.

Traditional cranberry sauce is loaded with sugar. I opted to make this recipe from Diet Doctor, which is sweetened with applesauce. I added some orange zest and a pinch of cloves to mine, and only made half a recipe as it’s really just for me.

I’m keeping this moderately low-carb by keeping the portion small and not adding any sugar. Those three rounds in the picture above weighed 60 grams, which puts them at a full 10 grams of carbs for that serving. It’s a carb splurge for me. But these sweet potatoes are SO. GOOD. They’re roasted, then smothered in brown butter and sprinkled with toasted pecans. I don’t even miss the marshmallows.

Here’s how to make them:
Slice a medium-sized sweet potato into 1/2-inch rounds. Coat with melted coconut oil and sprinkle lightly with salt. Roast on parchment-lined pan at 375°F for 15-20 minutes, flipping halfway through, until they’re fork-tender and starting to caramelize. Place on a dish and keep warm. While the sweet potatoes cook, toast 2 Tbsp chopped pecans in a dry skillet over low heat until fragrant, being careful not to burn. Remove from skillet. Melt 2 Tbsp butter in skillet over medium heat, and stir gently until the butter turns golden brown. It will smell like heaven. Remove from heat and whisk in a pinch of cinnamon and freshly-grated nutmeg. Pour brown butter over sweet potatoes and sprinkle with pecans.

Ok, this recipe is a little bit of work, but I promise it’s totally worth it. ThisLow Carb Green Bean Casserole is so reminiscent of the kind your great aunt used to make, but it’s even better because it uses all fresh ingredients instead of canned. I promise you won’t regret the extra effort!

I’m bringing rolls to our family Thanksgiving dinner this year. I will probably make some regular carb-laden ones for everyone else, but I wanted to see if I could find a decent recipe I could eat.

Low-carb bread is inherently tricky, and after trying a couple of psyllium-husk-based recipes and just not being excited about them, I stumbled upon this one by Low Carb Maven. It’s a fathead dough, like my pizza, but with different proportions that hold up better to being a roll.

I used oat fiber in mine, added a little yeast, then split each portion into three, rolled them into balls, and baked them in a muffin tin to make clover rolls. I have a convection oven, so I think next time I’ll turn the heat down about twenty-five degrees and see if they brown a little more slowly. I was really happy with this recipe and even Hubs said, “It tastes like bread.” Hashtag winning.

Ok, friends. Don’t hate me. Stuffing has never been my number one Thanksgiving food, and I’m really not a gravy girl. So I’m just not going to bother making any for myself. I have enough to do without making foods I find just “ok,” can I get an amen?

But I know that some of you out there live for stuffing and gravy so I will send you over to some recipes I found that I would totally try if I were so inclined.

Here’s a paleo stuffing from Diet Doctor that looks like it’s worth a try.

This one from I Breathe I’m Hungry uses cauliflower instead of bread, which would make it easier than having to make some kind of low-carb bread first.

Oooh, and this one from Spinach Tiger looks promising as well.

This recipe from the Keto Diet App Blog looks amazing. If I were making gravy, I’d probably make this one, although admittedly it has a lot of steps. It looks soooo good, though.

Here’s a simpler recipe by I Save A to Z.

What is holiday indulgence without dessert? But when you cut out sugar, flour, and most fruits, it can feel sort of limiting. No worries, I got you covered.

One of the desserts I used to love to make on Thanksgiving before my keto days was pumpkin cheesecake, made with a gingersnap crust. So I developed a recipe for a low-carb version with all the same flavors. 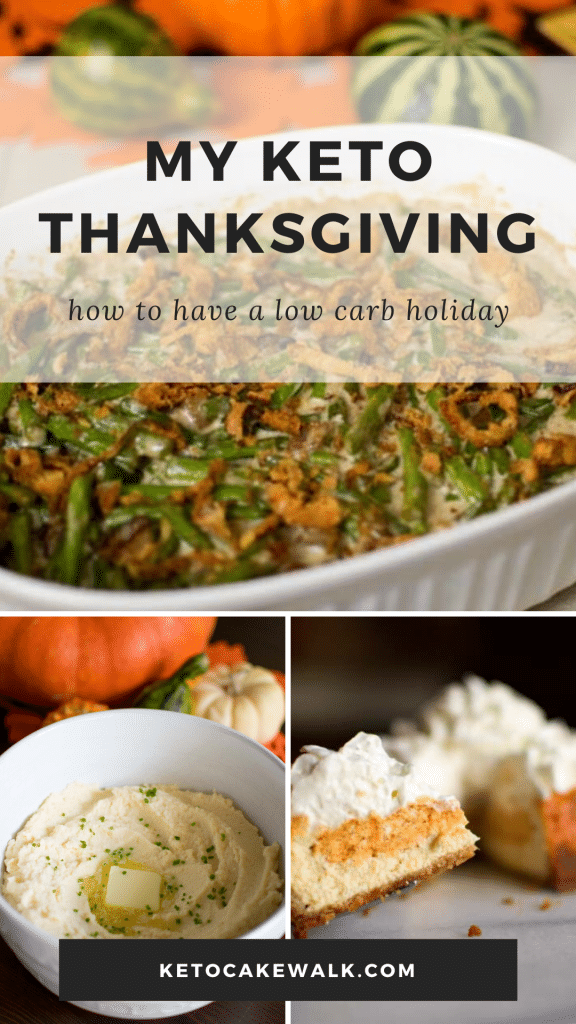 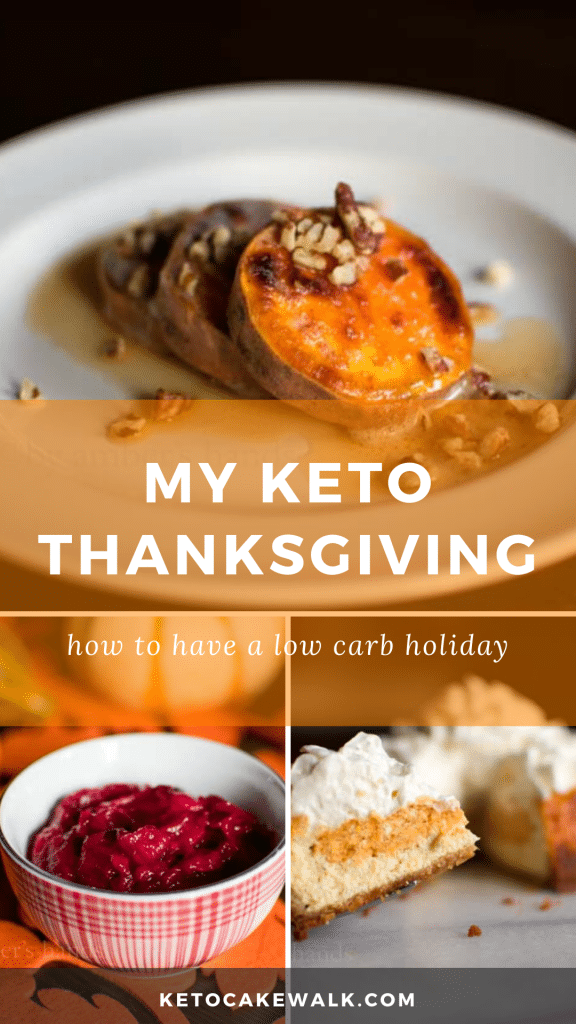