Yes, you read that right. I spent thirty days eating only animal products. Am I insane? Probably. Read on to hear about my 30 Day Carnivore Experiment.

Let’s get this out of the way first. I aim to describe in this article my own experience eating a carnivore diet for 30 days. I will tell you about my research and my results, but I am not a medial professional and cannot advise you to attempt this diet for yourself. You should always consult with your doctor before changing your diet.

Ok, first of all, you’re probably asking why on earth I would try something like this.

I watched with a bit of curiosity but initially wasn’t really inspired to try it for myself. Who on earth just eats meat?

I’ve never been vegetarian by any means, but I’ve never been a huge meat eater, either. Even after switching to a ketogenic diet, I have always struggled to get in enough protein. It’s not my default way of eating.

But then I kept seeing Vanessa on Instagram talking about her experience. She’s someone who has been on a ketogenic diet for several years. And with a switch to carnivore, she noticed both increased fat loss and muscle gains, without much exercise.

I found some YouTube videos done by Dr. Anthony Gustin about his experiment and why he think it works. (Seriously, check out those videos!)

I was still feeling a bit skittish about actually going through with it, but after the holidays I was feeling the need to get a little more disciplined and thought this might be a good time. Then I announced it on Instagram and I had to do it.

But isn’t it dangerous?

Almost everything we read about food in the media tells us red meat will cause cancer and if you want to be healthy and live long, eat tons of vegetables. After all, vegetables have all those vitamins!

Eating a carnivore diet must mean I had to supplement with tons of vitamins, right?

When I was researching this diet, I was completely shocked to find out that meat is actually higher in vitamins than vegetables. I feel like I’ve been lied to my whole life.

The chart above is courtesy of Maria Emmerich and can be found in her book, Keto: The Complete Guide to Success on The Ketogenic Diet, including Simplified Science and No-cook Meal Plans

as well as in her extremely helpful article “Keto vs. Vegan” where she compares Keto, Carnivore, and Vegan diets.

So by cutting out some additional food groups, I was actually increasing my nutrients!

The other common concern in eating lots of red meat is, of course, the (dun dun dunnn!) saturated fat content. But that assertion has always been based on terrible science and I eat large amounts of fat on a regular keto diet and have never felt better in my life.

There were a few potential benefits I was interested to see if I experienced. These included:

What did I eat?

For this experiment, I ate meat, eggs, a small amount of dairy, and I included coffee and tea as well. People who eat very strict carnivore diets include only meat and water, but I wasn’t ready for that level of diet.

I ate a lot of steaks, eggs, and burgers. I added some roasted chicken sometimes, but tried to focus mostly on beef as it’s more nutrient dense.

I still used cream in my coffee, and I used cheese as a condiment. But I tried to avoid using too much dairy as it’s a little bit of a concession anyway.

The first few days, I actually found that I was hungrier, and I made sure to eat three meals each day. However, by the end of the experiment, I found my hunger had decreased quite a bit and I generally was eating only two meals per day.

What Did I learn?

Having already gone through the process of switching to a keto diet, I didn’t expect this experiment to be terribly difficult. I figured I wasn’t snacking much anyway so how much different would it be?

Well, that first day was quite a bit more difficult than I thought. I really missed chocolate.

It was definitely an adjustment for me, and I found out just how much I did snack. I was used to being able to grab a handful of nuts occasionally, or add a little dark chocolate to the end of my meal just because.

Those things aren’t necessarily bad, but I really didn’t realize how much I was doing them. So that part was eye opening.

I also realized just how satiating meat is. This shouldn’t really be a surprise, but I’m someone who has always struggled to get enough protein in my diet, so I never experienced the full effect before this experiment.

A keto diet is already far more satiating than the Standard American Diet (SAD) because of the high fat content, but I found the carnivore diet more satiating still.

I ate to fullness at every meal, but eating carnivore meant that I never got an uncomfortable full feeling like I could get even with including just vegetables and nuts.

One of the huge things I noticed when switching to a keto diet was how much calmer my stomach became. But eating a carnivore diet I found it calmer still. Absolutely zero bloat whatsoever. My stomach felt superflat.

Also: fiber is totally overrated. I know at least some of you are wondering about whether zero plant material would translate to constipation (I know I wondered!) and I can say that at least in my case, there was absolutely no issues with this whatsoever. Adding some fiber back into my diet afterwards, however, caused a bit of digestive discomfort.

What Were My Results?

I was curious to find out if I saw any difference in body composition. I only lost 2-3 lbs but I definitely noticed a difference in my before and after photos.

I was sick on and off with a cold and sinus issues most of the time I was doing this experiment, which was really frustrating to me. Because of this, I couldn’t assess whether it made me feel any better than eating regular keto. I also couldn’t work out as much or as hard as I was hoping.

But I did try to focus on strength training as much as possible when I worked out. And I do believe the extra protein was very helpful in helping with muscle building and recovery.

I had also initially planned to add foods in gradually but found that by the end of my 30 day experiment, I didn’t have the willpower. 😂

Despite getting a little tired of it by the last week, I’m really glad I did this experiment.

I’ve found I really do feel better when I focus on eating mostly protein and keeping everything else to a minimum. Yes, I’m back to eating chocolate regularly, but I’m not eating as much of it every day.

The weekend after I stopped my experiment, I tried not to go too crazy but I definitely ate a fair amount of chocolate and nuts. And I felt terrible!

So I’m keeping up this high-protein, meat-based diet for the most part. And I’m really happy with it. I’m not sure I’ll do another 30 days of strict carnivore again, but I could definitely see doing carnivore-only days or even weeks, especially after the holidays or any time I’ve over-indulged.

There’s actually a term for this– Protein-Sparing Modified Fasting. It’s a similar idea to Intermittent Fasting, but eating only protein allows for your body to continue building and maintaining muscle as you’re fasting the other macronutrients.

I will say that I don’t think the carnivore diet is for everyone. I don’t think it’s a long-term diet for most people, unless you’re using it to combat disease. But I do think it can be helpful short-term for many people (under a doctor’s care, of course.)

A note about sustainability:

I know there are some of you out there who will be concerned that this is an unsustainable way of eating and will have negative environmental impact. For anyone who is curious about learning more about this issue, I’d encourage you to watch this video by Dr. Peter Ballerstedt about why ruminants like cattle are important to human health as well as the health of the environment.

Would you ever try this diet?

Tell me in the comments! 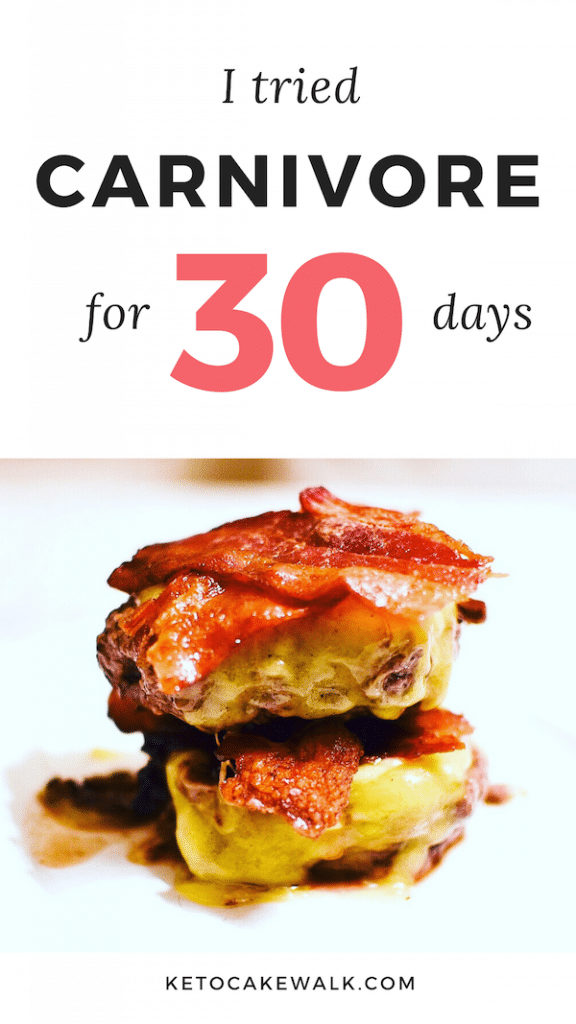 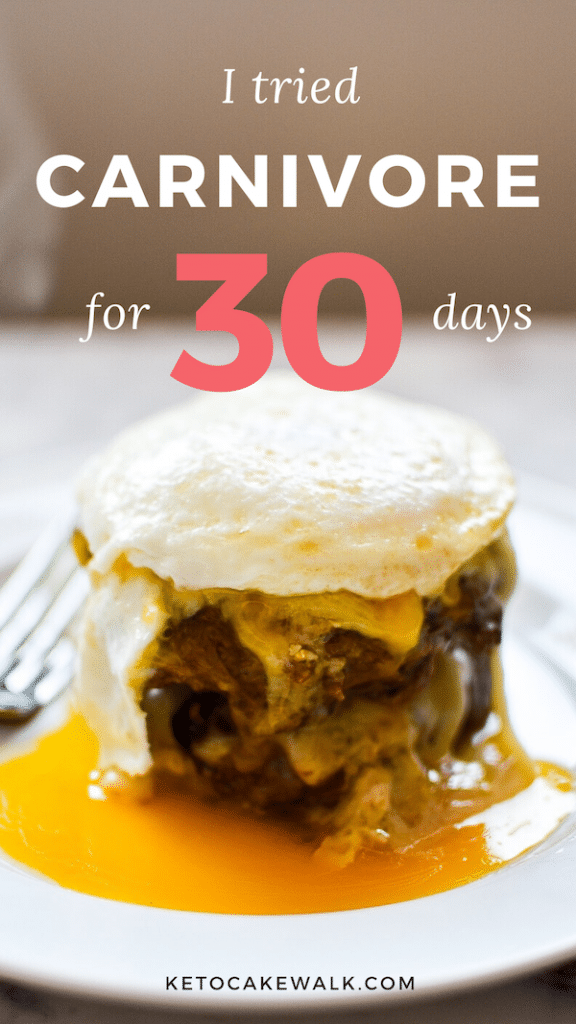 4 Comments on My 30 Day Carnivore Experiment