I love rhubarb season! It’s one of those seasonal favorites that feels so special in part because of its lack of availably other times of the year. So whenever spring rolls around, I can’t wait to make all the rhubarb recipes! And these keto rhubarb bars are one of the best! They’re super easy and deliciously showcase all the beautiful flavors of rhubarb.

While rhubarb is technically a vegetable, it’s generally used in sweet applications. It’s extremely tart, but when put in a dessert, it gives a wonderful sweet tart combination. It’s often paired with strawberry, but I love it on its own here. It really shines as the star of this dessert.

Rhubarb is one of those veggies that isn’t usually sold in grocery stores. Most of the time, it’s something grown in people’s home gardens. If you don’t have any yourself, you probably have a neighbor who grows some and who would love to foist some on you since it can be very prolific. You can also often find rhubarb at farmer’s markets, and we have gotten some in our CSA boxes as well.

If you’re not familiar with rhubarb, you should know that the leaves are poisonous and shouldn’t be consumed! But the stalks are perfectly fine to eat.

My grandma’s recipe has a meringue topping on it. I decided to leave it off this version for a couple of reasons. One, I don’t love the meringue part of it particularly. And two, pure laziness. I just didn’t feel like messing around with it. This makes the recipe much simpler and it takes less time.

That being said, if you adore meringue, you can make some. The filling calls for 3 egg yolks, so just take the remaining whites, whip until stiff and add 1/4 cup sweetener. Then spread over the top of the bars once they come out of the oven and bake again until the meringue browns.

But let’s get to the bars themselves, shall we?

These bars have a lovely, thick shortbread crust that makes them nice and sturdy. It doesn’t detract from the flavor of the rhubarb, but adds a nice balance of crispness against the softer filling.

The crust gets par-baked for about 10 minutes before adding the filling. This helps ensure that the crust gets nice and crisp. After the par-bake, the crust will be somewhat set, but not browning yet.

Technically this filling is a custard filling, as it’s made up of egg yolks and cream and sweetener. But it’s heavy on the rhubarb, so it doesn’t come across as overly custardy. I don’t think that’s a word but I’m using it anyway.

You’ll need to beat the egg yolks with the sweetener, cream, and xanthan gum enough to get the mixture lighter in color and well-mixed. The sweetener doesn’t need to be dissolved completely, but you want to give it a good mix. You can do this either by hand with a whisk or with an electric mixer. Then fold in the rhubarb.

Add the filling to the par-baked crust once it comes out of the oven. Do your best to spread it evenly. This takes a small amount of effort because of the rhubarb chunks.

Bake the bars for about 40-50 minutes, or until the middle is set and the edges are just becoming golden brown.

The hardest part comes next– allowing the bars to cool completely before cutting and serving. I know, it’s hard to be patient. But the bars will fall apart if you try to cut them too soon. So give them some time and your patience will be rewarded.

I like to sprinkle the top of the bars with some powdered sweetener– I think it makes them look extra pretty. But save this until right before you serve them or it’ll soak in. I like to use a powdered sugar duster like this one.

Just look at how pretty that is! The lovely thick shortbread and the heavily studded rhubarb filling. It’s just perfection.

I cut these into nine bars, as I find that to be just the right size to be satisfying. That being said, you could also cut them into 12 and lower the net carbs down to 2g per bar.

These are just like sunshine in a bar. A perfect balance of sweet and tart and buttery and light. A family favorite, for sure!

I hope you enjoy these beautiful keto rhubarb bars! 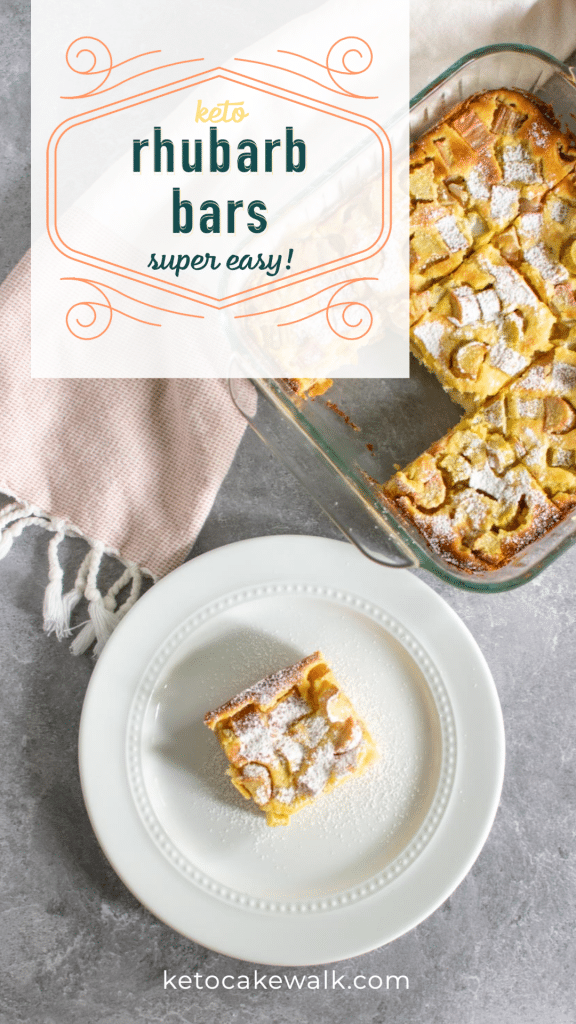 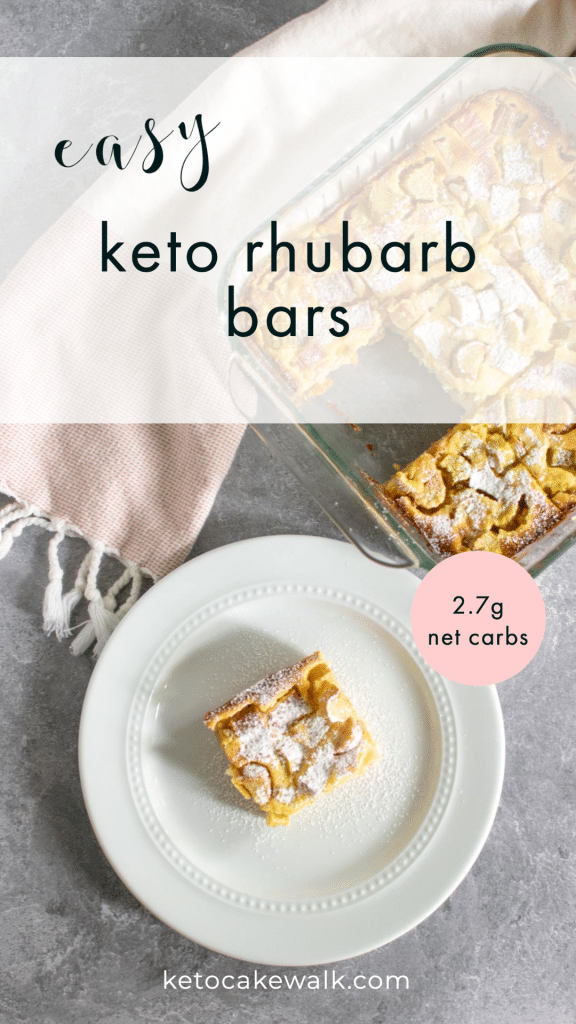