After sharing my health journey that led me to the ketogenic diet, I shared the post to Facebook and heard from more than one person that they want to try changing the way they eat, but wanted to know, “What do I put in my coffee?!”

Like many people out there, my friends are creamer junkies. Let me tell you, I understand! I was a total creamer junkie for a long time. Like a “Do you want some coffee with your International Delight?” kind of junkie. And if you’d asked me back then if I ever thought I’d be drinking coffee with no sugar in it at all and enjoying it now I wouldn’t have believed you.

The thing that led me away from store-bought creamer initially wasn’t actually the sugar. I didn’t like the fact that most of it contained hydrogenated oils, and generally had a long list of ingredients. Sure, there were some more natural options coming on the market, but at the time there were only a couple of flavors and they were significantly more expensive. So I started making my own. And in the process I found a way to slowly lower the amount of sugar I wanted in my coffee to the point now where I don’t use any.

Notes on the recipe

This recipe is really, really flexible. In fact, I’m including four different variations that can each be tweaked to suit your personal preferences. The base is two cups of half & half, but for anyone on a low-carb diet, I’d suggest using one cup heavy cream and one cup cashew or almond milk. You could also use all cream and use less of it at a time. If you need to avoid dairy, try one cup of your favorite nut milk and one cup coconut cream. This would also make it vegan, paleo, and Whole30 compliant.

As far as sweeteners go, when I started I put about 1/4 cup of sweetener in mine, but I suggest that you taste as you go and put the bare minimum of sweetener that you can handle and still enjoy your coffee. The next time you make some, use a little less. Keep going this way until you’re used to drinking your coffee without sugar. I find that the added fat of heavy cream can make up for a lack of sweetness, especially at first. Feel free to change the ratio of cream to half & half if you feel like that helps you reduce your sugar intake.

For two of the variations, I use whole spices to flavor the creamer. The blend above is for a fall spice flavor (similar to pumpkin spice, but without the pumpkin.) I prefer to use whole spices because they’re generally a bit more flavorful but also because they’re easier to remove from the cream. You can definitely use ground spices, but in that case I’d suggest pouring it through a coffee filter unless you don’t mind sludge in the bottom of your coffee.

You’ll see maple syrup in the photo above, which is the sweetener I started with in this blend. Now I just use a little maple flavoring or leave it out entirely.

This blend will make a gingerbread flavored creamer. When I would make this initially, I used about a tablespoon of molasses. These days, I’d still probably add a teaspoon for flavor. This is, of course, a personal choice as molasses is a sugar and does add some carbs. However, I feel that such a small amount per serving isn’t going to hurt. But you should make decisions you feel comfortable with for your own health and body.

A note about low-carb sweeteners: Many bloggers who create ketogenic recipes will use low-carb sweeteners derived from natural sources such as stevia, erythritol, xylitol, or allulose. Personally, I choose to use these sparingly for a few reasons. 1) I don’t love the way they taste; 2) they sometimes upset my stomach 3) they’re expensive and 4) results of scientific studies are mixed as to whether these low-carb, non-nutritive sweeteners may still cause an insulin response or cause cravings or overeating. I would recommend you research these for yourself before you decide whether to use them. I would definitely recommend staying away from them altogether for the first two weeks to a month when starting a ketogenic diet in order to adjust your palate to less sugar.

For each variation of the recipe, you’ll start by heating your cream mixture in a saucepan just until you see bubbles forming around the edges. You don’t want it to boil (if it does, don’t throw it out. Just be extra sure to strain it well, or you’ll have bits of cream “skin” that float around in it– not ideal.)

If you’re doing a variation with whole spices, I recommend crushing them gently with a mortar & pestle while your cream heats. This helps release their flavors a bit more. It’s not strictly necessary, so if you don’t have one, you might want to increase the spices just a little to get more flavor. You don’t want to grind them up or you’ll end up with a lot of spices that don’t get strained out.

Add the spices to the warm cream and let steep for 15-30 minutes. The longer you steep them, the stronger the flavor will be. Add sweetener or extracts at this time and whisk to combine.

Strain through a sieve to remove the whole spices. You could line the sieve with a coffee filter if you are using ground spices or if you really really can’t handle the idea of a stray piece of spice getting into your coffee. We all have our things. No judging.

Pour into a container, cover, and refrigerate. Should be good in the refrigerator for up to a week, but obviously do not drink if there are any signs of the cream turning or becoming contaminated.

There you have it!

I got these cute ceramic milk bottles at target several years ago and they no longer carry them, but you can find other cute ones like this one from The Container Store.

Low Carb: Instead of half & half, I'd suggest using one cup heavy cream and one cup cashew or almond milk to reduce carbs. You could also use all cream and use less of it at a time.

Dairy-free (vegan, paleo, Whole30 option): Use one cup of your favorite nut milk and one cup coconut cream.

Sweetener: Use the bare minimum of whatever sweetener you prefer. I started with 1/4 cup per recipe and decreased from there.

For a simple vanilla creamer that will blow your mind, steep one split vanilla bean in the warm cream. Remove and scrape seeds into the cream & whisk. Sweeten as desired.

Experiment with different extracts and spices to find your own favorite blend. LorAnn Oils makes some really fun flavor compounds that can be amazing in creamer! 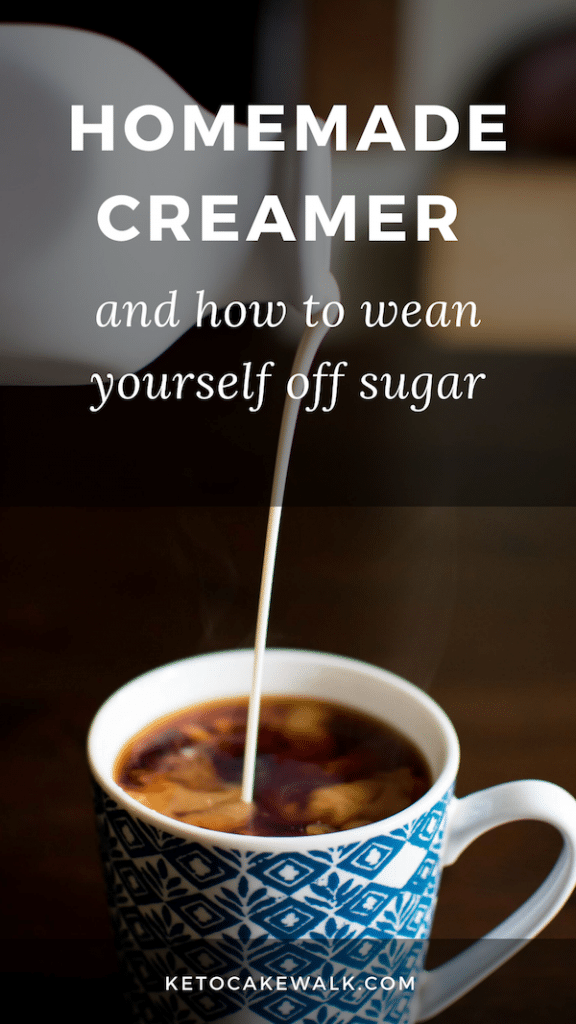