I’m going to let you in on a secret. I’m actually super lazy. If you know me in real life, this is probably not super surprising. But maybe you only know me from this site and I might look sort of put together here. I’m not. And so I love lazy recipes like this keto lazy creamed spinach.

I have nothing against traditional creamed spinach, but it involves cooking up mature spinach and then squeezing out the liquid and honestly I just really hate that. So for this recipe I use fresh baby spinach.

Not only is this recipe super easy, it’s a fantastic way to use up a bag of spinach that’s about to expire when you don’t want to eat the world’s largest salad.

Not that I ever forget to use bags of spinach in my fridge. I’m the most organized of meal planners. Lol. Sorry, I really tried to say that with a straight face.

Let’s get this started!

Start off by melting some butter in a cast iron skillet

Add 12 oz of spinach. That’s two of the smaller bags. You can also cut this in half if you only have one bag of almost-wilted spinach in your fridge.

I rough chopped it, but I don’t always. When I’m at peak-laziness I throw it all in whole. It depends on how much you care. Obviously, the pieces of spinach are bigger if you don’t chop it so take that into consideration.

>>For more lazy meals, check out these sheet pan dinners!<<

Cook this down until it’s wilted. At this point I grate a clove of garlic into the pan. You can use minced garlic as well, but in that case I’d add it either with the spinach or even before.

I buy pre-peeled garlic from Costco and keep it in my freezer, then I grate it with a microplane grater

and it saves me a ton of time.

I continue to cook it for a couple minutes to evaporate some of the liquid before moving on.

Next, add the cream.

Ok, so I don’t add any cream cheese to mine– I prefer it a little saucier. But if you want to add 2-4 Tbsp of cream cheese, you can do it now. Just be aware that you’ll need to recalculate the nutrition if you do that.

Next, a whole lotta parmesan cheese. You really need to grate it fresh. If all you’ve ever had is the stuff from the green can that’s unrefrigerated until opened, you need to get some real stuff because the flavor is drastically different.

Also, pre-grated cheese has anti-caking agents that can affect the way the cheese melts into a sauce. So if you’re using cheese in a sauce, it’s always a better option to grate it yourself.

Stir in the cheese and let it melt into the sauce. Season with salt & pepper.

You can 100% leave it as-is and just serve it up alongside your favorite keto meal.

Or you can top it with some extra parmesan and broil it for a few minutes or until golden brown.

to portion mine out.

But the other way I love to eat this is to take a double-serving of spinach and top it with a fried egg and make a meal out of it.

Any way you decide to serve this up, I think you’ll agree this is an incredibly easy, no fuss way to eat your greens!

You can add a couple tablespoons of cream cheese here as well, if desired. Stir in with the heavy cream. 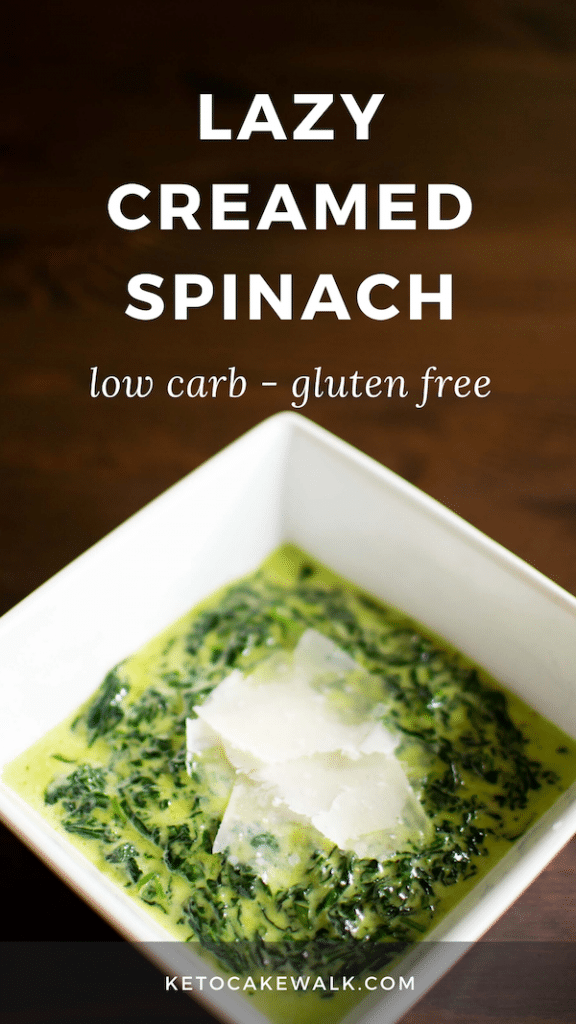 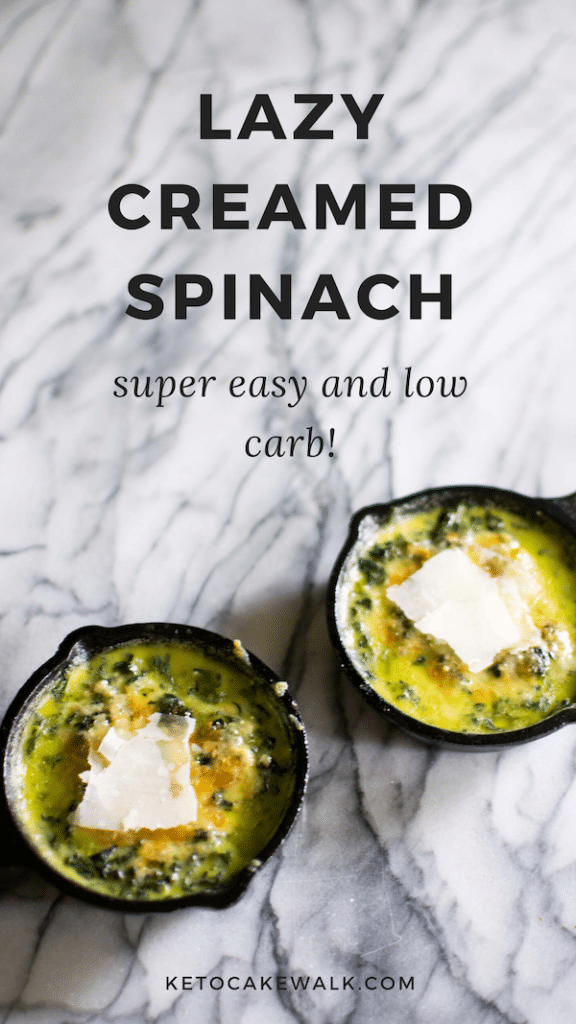