You know how some things are so quintessential to the holidays that you can’t imagine it without them? Mint meringues are one of those to me. My lola used to make them, and then my mom. I’ve never had a Christmas without them. So it was an absolute must that I come up with a recipe for these keto mint chocolate meringues.

This was no easy task, you guys! I made a total of six batches working to get these right! You wouldn’t think it could be so difficult. But here we are! Good thing you’ve got me to do the testing so you don’t have to! 🙂

To make a basic meringue, you need egg whites and sugar. Finding the proper low-carb sweetener was surprisingly tricky.

The first thing I reached for was my low carb sweetener blend. It works really well for most things and is the most economical choice. Plus it has zero carbs.

Unfortunately, it just wasn’t quite right. I mean, it worked in the sense that the meringues dried out into a crisp cookie. But erythritol-based sweeteners do not get the meringue glossy. It stays a foamy texture just like whipped egg whites. And that makes for a somewhat coarser texture to the cookie.

My next sweetener to try was allulose. I thought for sure it would work, given that it’s a type of sugar. I added it to the egg whites and watched as it turned them a beautiful glossy white. Then I added the other ingredients and formed the cookies.

I set them in the oven.

And then I smelled them. They turned brown immediately. Whoops. Allulose browns at a much lower temperature than sugar.

I tried again, baking them at a really low temperature. This time they didn’t brown. But they also never dried out. They stayed really soft, not at all like a meringue cookie.

Please note that xylitol is toxic to pets, so never leave sweets made with xylitol where your pets can ingest them!

Then I turned to xylitol

I powdered it first, as sugar alcohols don’t dissolve as readily as sugar. (I used an old coffee grinder I use for spices and such.)When I added it to the egg whites, they glossed.

The next morning I opened the oven and found lovely crisp cookies with a fine texture.

While I love my Pascha dark chocolate chips, and the fact that you can find sugar free chips like Lily’s, neither of these brands makes mini chips. And these are petit cookies. Large chips just won’t work.

. It works pretty well and has the benefit of being higher quality chocolate.

I like to pipe mine out using a reusable piping bag and a really large round Ateco icing tip. But you can definitely just use two spoons to drop them onto your cookie sheets.

Speaking of cookie sheets, make sure you grease them well. Even when greased, I find it easiest to remove them using a thin offset spatula.

And there they are. Mint meringues like my lola used to make, only we’ve lowered the carb count.

Leave some out for Santa. He won’t be able to tell the difference. 😉

A note about xylitol: even being a sugar alcohol, xylitol is not without carbs. In fact, of the low carb sweeteners out there, xylitol is the highest in carbs. This means these cookies still have 1 carb each even though they’re small and light.

I attempted a batch where I swapped out 1/4 cup of xylitol for my low carb sweetener blend, expecting it to dry out easily. What I found was that somehow they did not dry out at all in the oven (despite both sweeteners drying out on their own in separate batches) but then after leaving them out of the oven at room temperature for several hours, I noticed they began to crisp on the outside. But the next day, they’d fully dried out to a crisp cookie. So if you’d like to lower the carb count a bit, this is an option. Just know it will take an extra day. 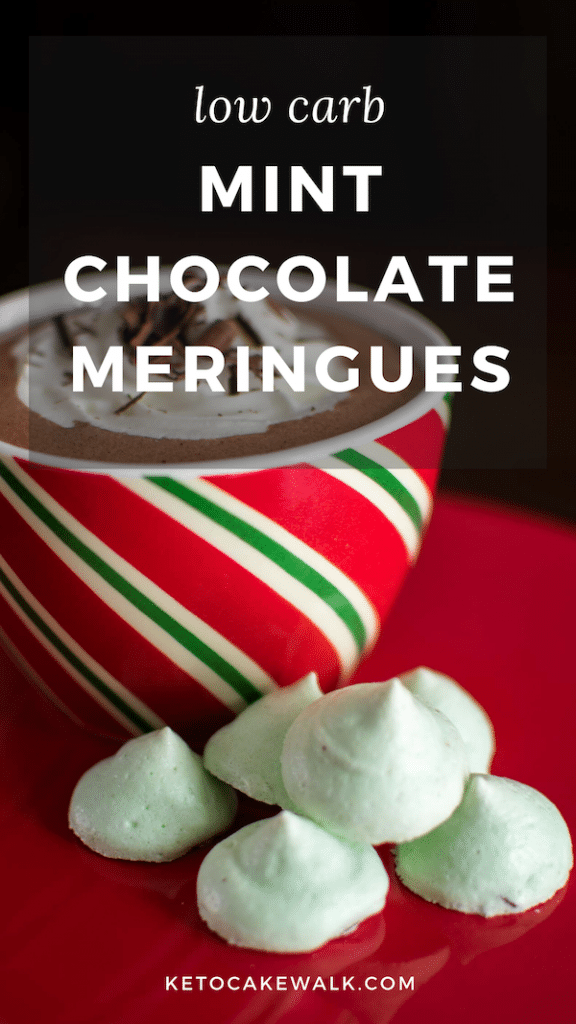 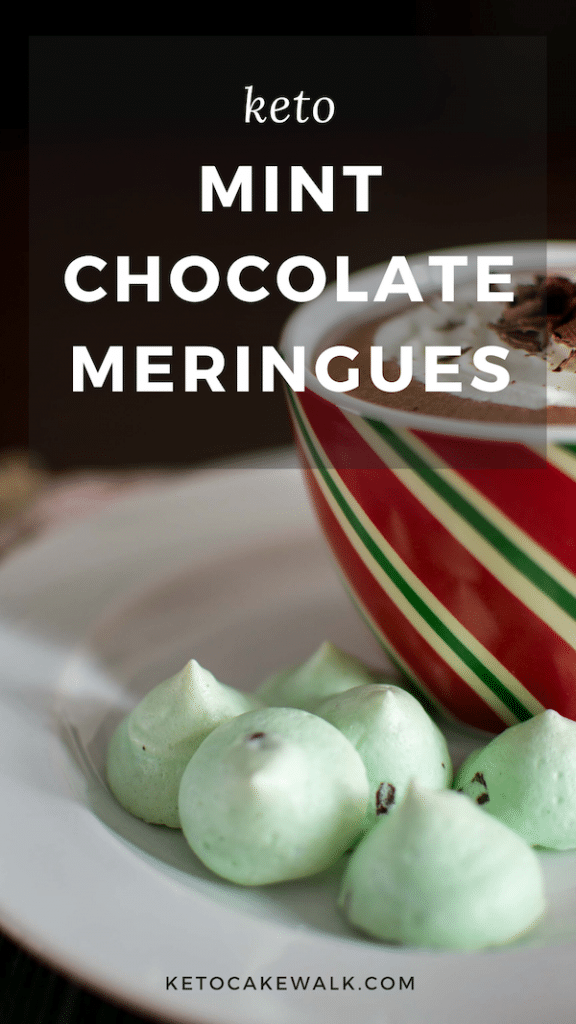