Brownies! Such a classic dessert, but one I’ve had a lot of trouble getting right when creating a keto version! I think I’ve finally landed on something that’s as close to perfect as I’m going to get! These easy keto brownies are totally fudgy with just the right amount of chewiness and intense dark chocolate flavor.

I have been working on this recipe for a long time, you guys.

I’ve made many different keto brownie recipes floating around the internet. Many of them were fine, but all left me wanting something more. And so many of them I swear used pictures of boxed brownies because mine looked nothing like the photos.

It seems pretty easy to make a keto brownie that’s fudgy. But texturally every recipe I tried lacked in bite. They were a little too soft and fell apart when I bit them in a way that didn’t feel like traditional brownies.

So I played around. A lot. I can’t tell you how many batches I’ve made. Many were decent. At least one we threw straight into the trash. And one the kids liked but was way too sweet for our tastebuds.

You guys, I’m pretty happy with these brownies. Are they exactly like the real deal? No. One thing I can’t make keto brownies have are the slightly crispy, chewy edges. But everything else is pretty darn close with this recipe.

I highly recommend measuring your ingredients by weight for best results. Especially things like cocoa– depending on how packed it is in your container, you can get very different amounts if measuring by volume. That being said, I’ve included volume measurements as well.

There are some important things to note while making this recipe. First, your butter needs to be melted and pretty warm when you start. You don’t want your butter/sweetener/cocoa mixture to be so hot that it scrambles your eggs when you put them in, but it needs to be quite warm.

If you mix your cocoa mixture together and find that it’s gotten too cool, you can pop it into the microwave for 30 seconds (if you’re not using a metal bowl!) or stick it over pan of simmering water to warm it up a little.

This is important because of the next step.

Next we add the eggs.

The eggs really need to be room temperature. If they’re cold, it’ll make this whole mixture firm up and get really hard to spread your pan.

When you add the eggs, add the first one and just beat enough to mix it in. Then add the second. Then you need to beat it on medium high with your electric mixer

for one minute. Set a timer. You can see above what mine looked like after mixing in the picture above.

This is important because it incorporates just the right amount of air into the batter. If you skip this part, you’ll have ultra dense brownies. They’re actually really similar to the fudge brownie pieces you find in ice cream. It’s great for ice cream, but they’re less like regular brownies this way.

If you mix them for longer, you’ll get cakier brownies. And if you find that after mixing them for a minute, the mixture is light in color and fluffier, it means your butter mixture wasn’t warm enough. It’ll still bake ok, but it’ll be more difficult to spread.

After that, it’s just pouring it into the pan and baking.

in an x shape in the bottom of the pan. This gives you handles to lift it out after it cools so you can cut it easier.

As far as baking goes, I bake mine at 325°F. If your oven runs cool, you could turn it up to 350° but you definitely don’t want to have it be too hot or your edges will burn before the middle sets.

I start checking the brownies at about 15 minutes, but these baked at 20. Because ovens vary, it’s important to watch carefully. You want to take them out as soon as they’re set so they don’t overbake.

If you like, sprinkle the brownies with some flakey sea salt

right after they come out of the oven. Dark chocolate plus salt is one of my favorite combinations, but feel free to skip if it’s not your thing.

After that, just cool and slice! This recipe makes 16 brownies.

These have the perfect combination of soft, chewy, and fudgy consistency, IMHO. My husband said these are super close to regular brownies as far as he’s concerned.

I’ll call that a win.

And if you’re feeling really indulgent…

Top a warm brownie with some homemade ice cream and keto fudge sauce!

Easy keto brownies for the win!

The allulose can be substituted with the same amount (by weight) of xylitol, but it will need to be powdered (as it does not dissolve well otherwise.) Xylitol has a higher glycemic index than allulose, so the overall net carb count will be higher. Please also keep xylitol and baked goods made with it away from pets as it is highly toxic to them. 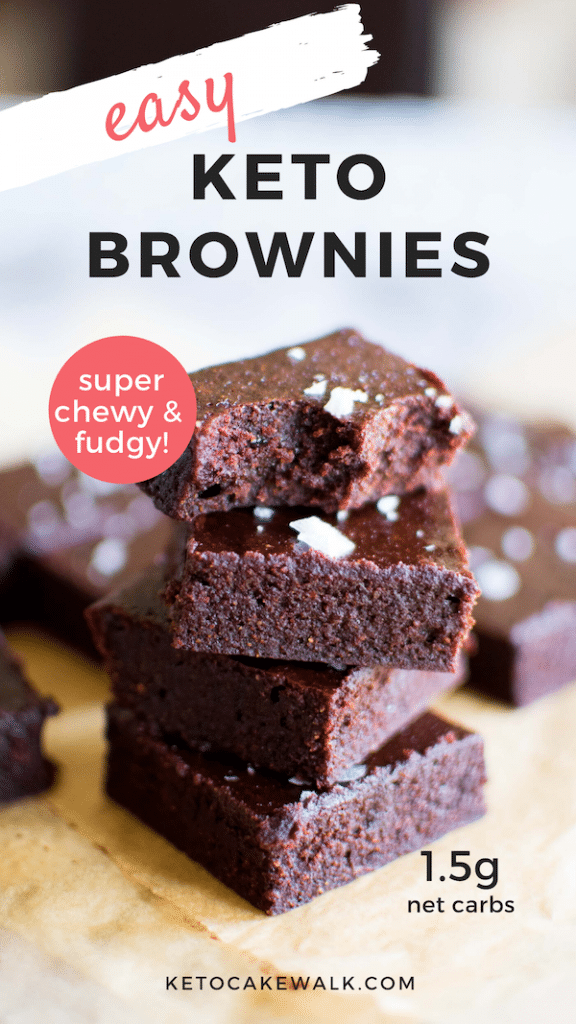 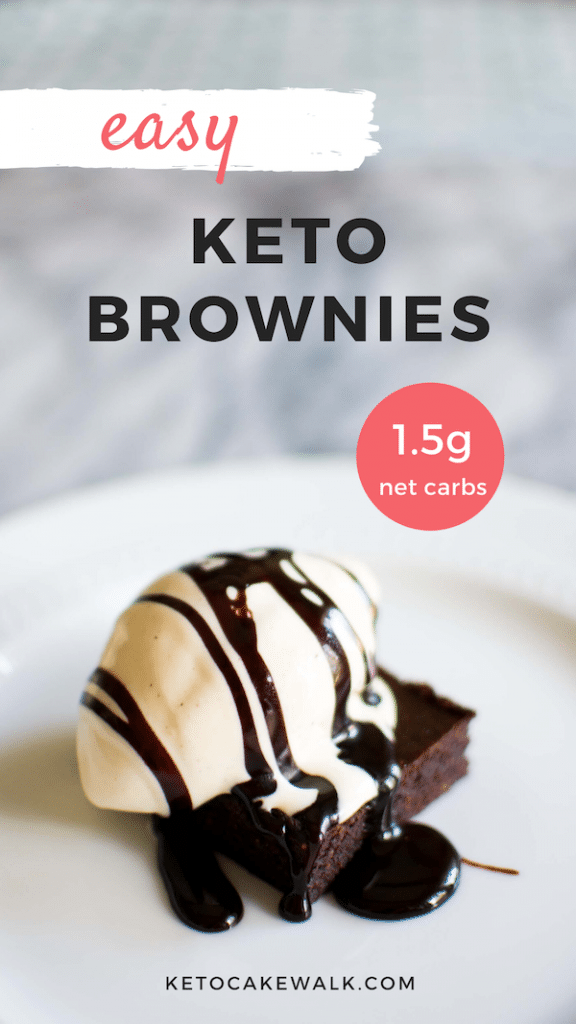